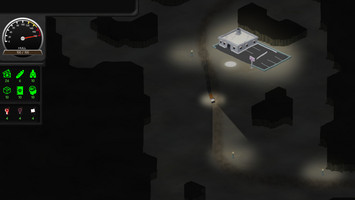 This time I've really planned to finally release a new demo again. But certain things got in my way again. First of all the abstruse idea that there should be no light in a cave environment, which is why everything has to be dark. Promptly I experimented a bit in Photoshop until I produced a halfway pleasant shader. Then I programmed some shaders around until I could set light sources, which were then displayed appropriately. You can see the preliminary result in the linked image files. I'm not satisfied with it, but it at least fulfills my urge for darkness.

Right after that I wanted to produce more content, until I noticed that I still have no real idea what the world looks like now. That's why I sat down, shook some ideas for regions out of my sleeve, tried to connect the whole thing for the moment and then put everything into a nice little map and textured it. It all looks pretty nice now, but it's rather destroying my previous approach with the content. But since I wanted to change from a single-celled map to several rooms soon anyway, I threw the whole system overboard. Currently, as you can see in the image, you are spawning in a separate part of the map, where you can find the diner and another locality. Then you'll have to go through a little story that will give you access to the rest of the first sector. It's like a tutorial to help you understand how to proceed with the rest of the game.

I also took a lot of inspiration from the Metroidvania genre. Not all sectors will be accessible at the beginning. First comes the tutorial, then the first sector, where you have to play for a short time to get access to two more sectors. In these sectors you move again for a while and then you can unlock more accesses. At the beginning the world should be focused to make it easier for you to get into the game, but at the same time you should be able to explore and discover as much of the world as possible later on and in any order you like.

- Designed a overworld and a room-map for the first sector

- Made a couple screens, which where you can drive from room to room.

- Added new sprite design for the diner and reworked some of the texts.

I want to finish at least the tutorial. Apart from that I will probably texture some smaller rooms with DevArt, so that you can at least get a little further in terms of driving.

But if I really finish the tutorial, I'll use the opportunity to create a new demo version.