A downloadable game for Windows

The hardest RPG EVER MADE!

Because it doesn't really exist and you can't really do anything except:

This was the second "game" I made.

Even though it is not really a game. More a fixation on the soggy element of most rpgs. I really hate when the game throws you some random stuff that makes you lose or win. In some RPGs that goes even farther, as almost any of your actions are somewhat influenced by chance. It goes so far, that the randomization completely knocks you out.

I am talking about you, XCOM...

I wanted to make an RPG which was in no way based on random stuff. There shouldn't be any randomization in fights. So if you win, its your win. And if you lose, well, then you did something wrong.

But alas, the one I uploaded is the original gamefile, with the most gameplay. After doing that fight I programmed a bit further, adding an ugly worldmap and roaming enemies.

Then a new thought came to me, of programming the feature to implement your own attacks into the game. I managed to conjure a list of attack options, where you could pick if you want a stunning attack, a poisoning attack, how much damage it should do and so forth. Every option would withdraw points from your total building pool. The more option you picked the more expensive the attack would be once in a fight.

This is kinda a cool concept, which I definitely want to try again in the future.

The hardest RPG ever made.zip 2 MB 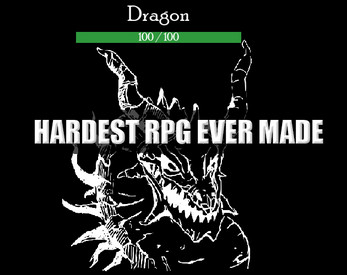